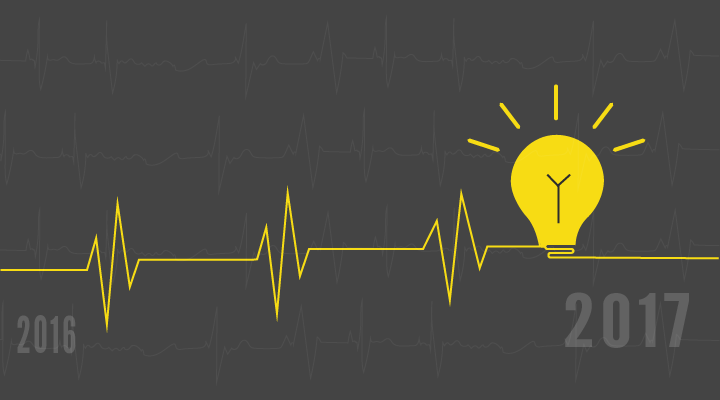 Last time, we looked at some of the most interesting new and up-and-coming gadgets of 2016 that improve people’s individual health. Here, we want to zoom out a bit and share with you some of 2016’s coolest innovations that improve health on a larger scale, affecting people directly or indirectly. Some of these are in production, some are still in development, but at least none are as likely to gather dust in the back of closets come February.

Medicinally, science has had some major breakthroughs this year, like vaccines for Ebola and dengue fever, and has also come up with some pretty amazing technological devices. In September, the FDA approved Medtronic’s artificial pancreas. MiniMed 670G is a hybrid closed-loop system that automatically monitors and regulates insulin levels in people with type 1 diabetes. It’s one big step closer to a fully closed system.

Another interesting monitor is being developed at Northwestern University: A microfluidic patch about the size of a quarter that analyzes a person’s sweat and sends results to a smartphone app, potentially replacing blood tests. The question of whether sweating in a frigid doctor’s office will be any easier than finding a vein in one, though, has not yet been studied.

By now, everyone has heard and likely cringed over stories of the massive garbage patches in the oceans, and the pictures of animals strangled, injured, or starved by plastic. Well, science is starting to make efforts to slow down this accumulation through biodegradable alternatives.

Florida’s Saltwater Brewery made a splash earlier this year by announcing the development of edible six-pack rings for their beer, made entirely from the byproducts (wheat and barley) of the beer itself. These rings will feed sea turtles, instead of choking them.

Edible packaging is not just for turtles, though. The USDA is in the process of creating edible packaging to replace plastic bags and wrap for food. Made of milk protein (sorry vegans) and pectin, one day we won’t even have to unwrap our food before cooking it—just toss a soup packet in the hot water, watch the packet dissolve, and get some extra protein to boot. Nom nom, milk wrapping.

Another nom-ible invention is the edible spoon from Bakey’s, made exclusively from plants and salt (there you go, vegans). Pick from three flavors, eat your soup, then eat the spoon, too! They are currently only available in India, but, hey, with over a billion people, that’s not exactly a small debut market.

Now that we’ve saved the ocean, let’s look at the air and the energy innovations that can make our lungs and food cleaner. Detroit is doing its part for green transportation with GM’s Chevrolet Bolt EV, an affordable all-electric car with mileage and quality comparable with Tesla vehicles, minus the lengthy reservation list. And the NHTSA is watching out for people’s health, too, by now requiring normally quiet hybrid and electric cars to make noise when traveling under 20 mph so you won’t get run over when you cross the street while staring at your phone.

For companies or schools who prefer to brag about their environmental stewardship efforts, though, a local North Carolina company in the Triangle area came out with a new model of their “solar tree” that can provide shade to outdoor communal areas while generating electricity.

Further, Chinese and American scientists have collaborated to create a textile that gathers energy from the sun and body movements. Soon, your walk to your car will power your watch, all through your clothes.

In answer to all these American inventions, how is Britain planning to save the atmosphere? They’re going make fuel cells that run on urine. Yes, you read that correctly; two British universities and a bioenergy center teamed up to make cheap, clean energy devices from bacteria and human urine for people with no other access to electricity. So they’re improving the health of people and the planet.

Techno-geniuses the world over are inventing products to improve the health of Mother Earth and all her people. Are there any you think should have been mentioned? What are you looking forward to in 2017? Let us know in the comments below or on Facebook or Twitter.