Visual Studio is Microsoft’s Integrated Development Environment (IDE). You can use it for the development of computer programs, websites, web applications, web services, and mobile apps. Visual Studio uses platforms such as Windows API, Windows Forms, Windows Presentation Foundation, and Windows Store to develop software. Here is a list of 15 must-have Visual Studio extensions that are important for developers:

If you write comments, it is with the expectation that somebody will read them one day.  And it would be embarrassing if you misspelled words in those comments. This kind of situation can be handled by the Visual Studio Spell Checker extension. This checks the spelling of comments, strings, and plain text as you type or interact with a tool window. You can also customize it to perform spell-checking over an entire solution, a project, or selected items.

CodeMaid is a Visual Studio extension that has over a million downloads. This provides the ability to clean and simplify the code. Steve Cadwallader, the man behind CodeMaid, demonstrates code cleaning and reorganizing, visualizing and navigating through your code, comment formatting, and more in this video: https://youtu.be/M8iwCaw61Mo.

This is a must-install extension. It enables individuals in development to stop on their first mistake, saving numerous hours of work while working with large projects. VS Color Output changes the color of a line emitted to the output window based on the rules specified. The rules are made up of regular expressions. Rule map classifications, in turn, map colors. 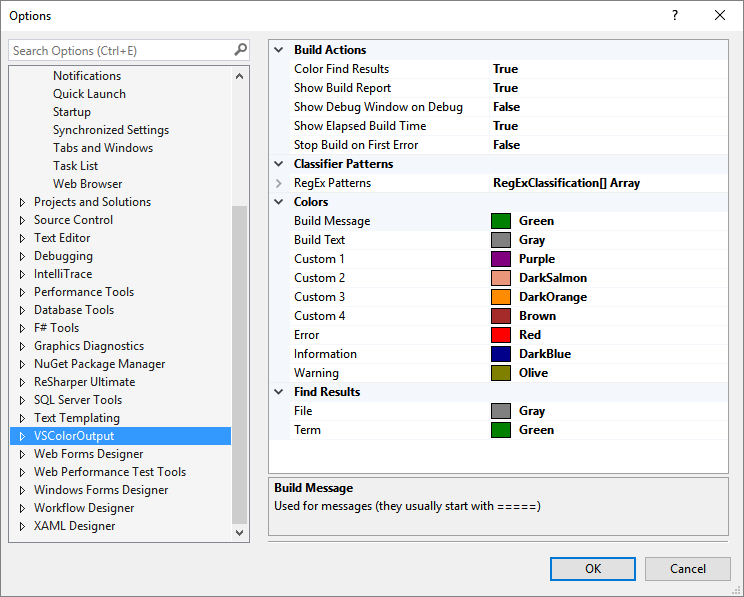 Visual Studio IntelliCode is a collection of AI-assisted skills that enhance developers’ productivity with characteristics such as contextual IntelliSense, argument completion, code formatting, and style rule inference. IntelliCode increases a current builder’s workflow with machine-learning facilities that provide an understanding of code and its context. It is applicable for C #, C++ (in preview), JavaScript/TypeScript (in preview), and XAML code, and is expected to be updated in the future to support more languages. By default, both base models of C# and XAML are enabled. You must manually enable the languages in the preview, as per your need.

The Trailing Whitespace Visualizer extension highlights and wipes any trailing whitespace in any Visual Studio editor on any line. By executing the Delete Horizontal White Space command contained in Edit-> Advanced or by using the shortcut key combination CTRL+K, Ctrl+\, you can easily delete all the trailing white space in a file.

Trailing whitespaces highlighted in the code

OzCode is a Visual Studio Extension that cuts down debugging time and increases productivity by detecting and isolating bugs, making them easy to fix. OzCode makes C# debugging simple and efficient. Omer Raviv, the author, demonstrates many magical debugging features, including a LINQ debugging experience, which makes learning and debugging functional code easier, in the video: https://youtu.be/82jq5cvl67E. 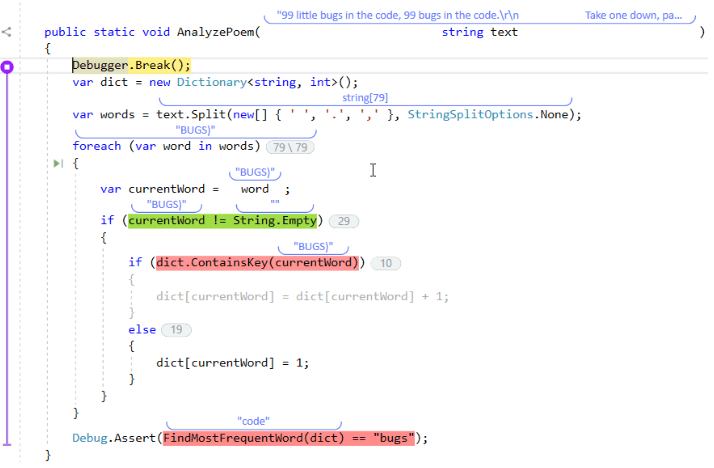 ReSharper is a popular Microsoft Visual Studio developer productivity extension. It automates most of what you can automate in your coding routines. It discovers and corrects compiler mistakes, runtime errors, and redundancies right as you type, and proposes smart adjustments for them. ReSharper enables you to study software by visualizing file composition, category and design hierarchies, call and value chains, and project dependencies. It lets you immediately cross your entire solution and leap straight to the precise folder and line you’re searching for. It also decompiles library code if needed. 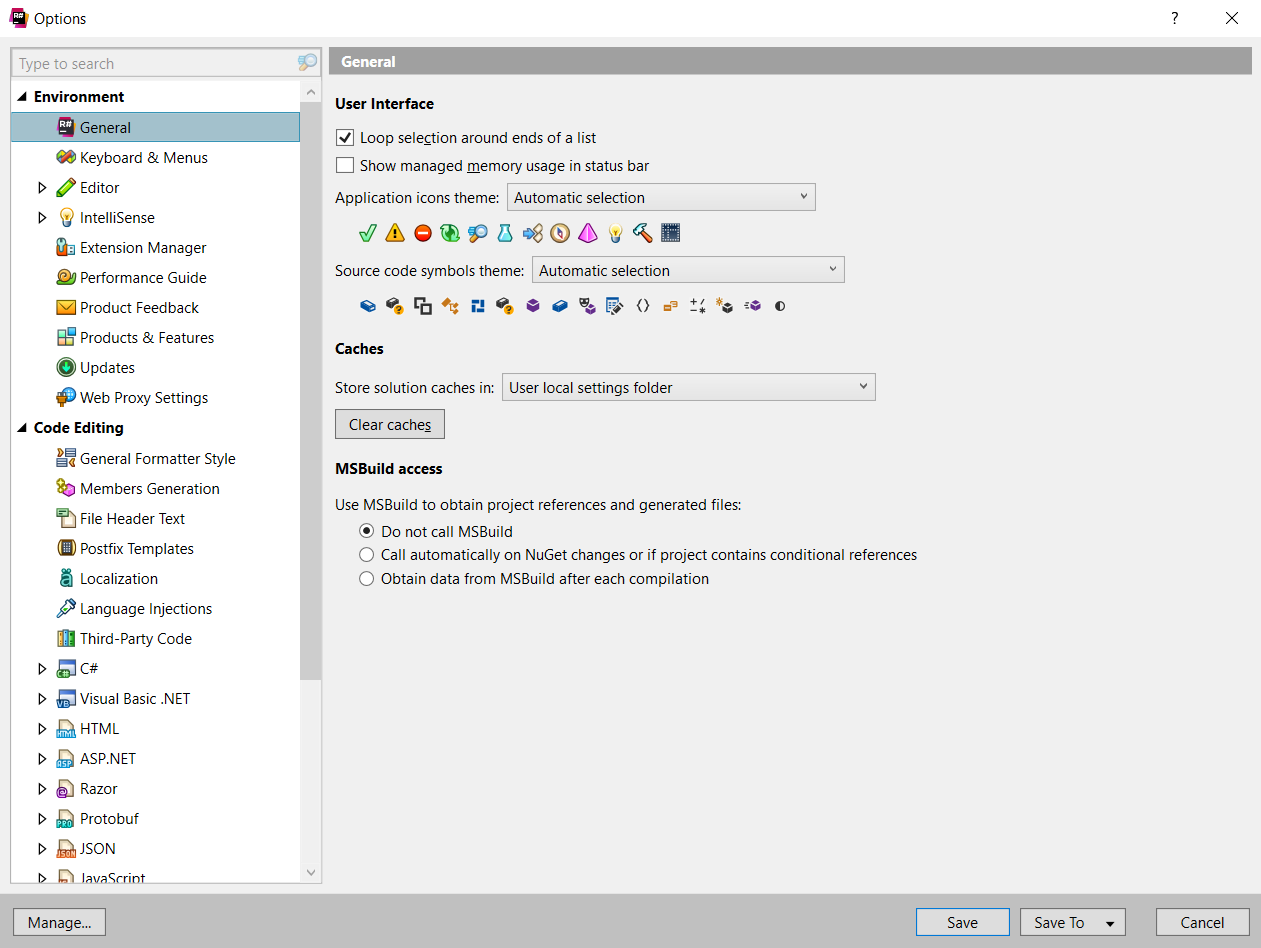 Glyphfriend is a Visual Studio extension enhancing the existing Intellisense to display preview glyphs for many of the common glyph-based font libraries. Some of the libraries supported by Glyphfriend are Bootstrap Glyphicons, Entypo, Font Awesome, Foundation, Ionicons, Material Design, and Octicons. 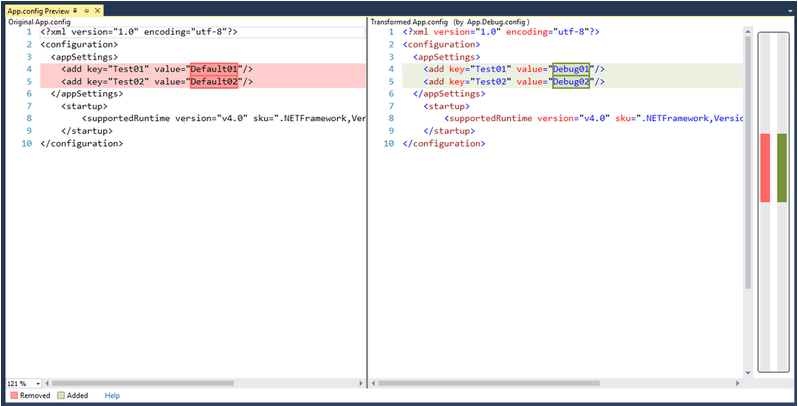 File Icons is a fantastic extension that adds icons for files that are not recognized by the Solution Explorer.

To offer customers the greatest feasible experience, we all want our applications to load as quickly as possible. One of the measures to accomplish this is to ensure the optimization of the images we use. The Image Optimizer extension for Visual Studio is very simple to use and is very efficient in optimizing the images. It uses industry-standard tools to optimize any JPEG, PNG, and GIF, including animated GIFs. It can do both lossy and lossless optimization. 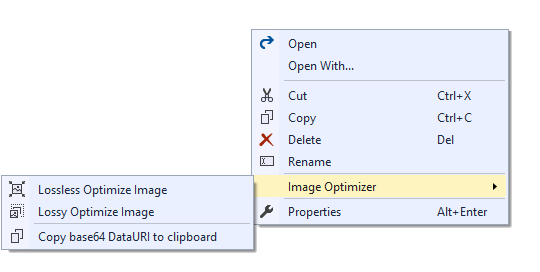 The nesting of files in the Solution Explorer of the Visual Studio is available for a long time now. But still, the rules it follows is not agreed by all. That’s not a problem anymore because File Nesting now gives you complete control over file nesting in Solution Explorer. You can both automatically and manually nest and unnest the files based on their names. File naming rules can be defined to automatically nest the files. You can then apply these rules to any file, folder, or entire project.

Almost 400 analyzers, refactorings, and code fixes for C#, powered by the new Roslyn compiler, are bundled with Visual Studio. What’s not to like? Roslynator works closest to the ReSharper, but the biggest advantage is that it is free to use.

NCrunch is an automated, continuous parallel testing tool for Visual Studio .NET. It intelligently assumes responsibility for running automated tests so you don’t have to. It provides you an enormous quantity of helpful inline data about your tests (such as code coverage and performance metrics) in your IDE while you are working. 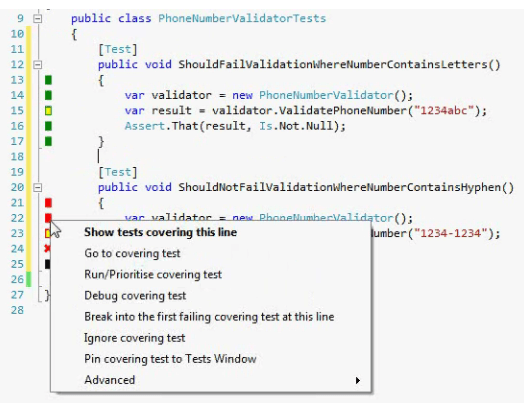 Options in NCrunch for running automated tests on a particular line

Let’s face it. The number of Visual Studio project templates available out of the box is pretty limited. SideWaffle fixes this with a lot of new projects and item templates. 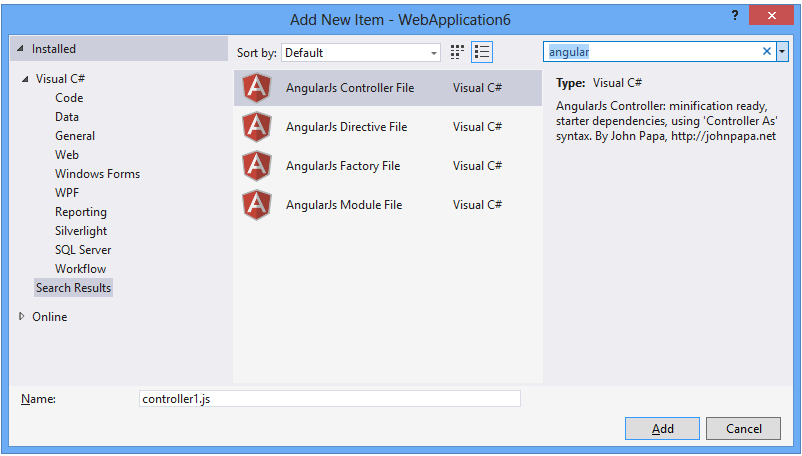 I hope this blog enriched your knowledge of Visual Studio extensions and assisted in the problems faced by developers in their daily lives. 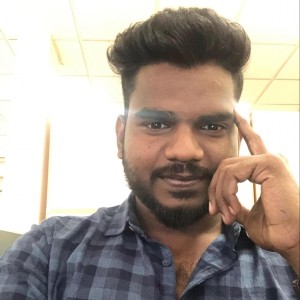 Joseph Christ Nithin Issack
Joseph Christ Nithin is a Software Engineer at Syncfusion Software. He has experience in the development of web controls in ASP.NET MVC, ASP.NET Core, Angular, React and JavaScript platforms. He is currently working as a Full Stack website developer in ASP.Net MVC which uses SQL as the Back-End.
More Posts

15 Must-Have Visual Studio Extensions for Developers - How to Code .NET

Visual Assist is the best!
Just check this perfect extension for writing as well as debugging.

Hi Drazen,
Thank you for coming up with this tool, I will give it a try.

Hi Chris,
Thanks for the suggest.
We will be working on it in a separate blog.

Nice list, but it would be even better if you had included with each one whether it was free or paid.

Nice. Thanks mate. I already have quite a few of these installed but a good list of useful tools. Thanks

Hi KRUTS,
Thanks for the appreciation mate, this means a lot to me

I was just looking for this!!! You are a saviour sir!!! Thanks again!!!

HI Terry,
I am glad that this post helped you.

I already have most of these installed, but how on earth did you miss the best extension of all which is CodeRush from DevExpress?
Thanks anyway.

Hi Robert,
Thank you for coming up with this extension. Opinions differ, I personally prefer to list ReSharper over CodeRush.

The Live S erver extension provides you with a quick development Live Server, with live browser reload enabled for static and dynamic pages. The cool thing about this extension is it has a go-live button on the taskbar, so you can easily spin up a development server at any time and it works seamlessly.

The Live Server extension is for the Visual Studio Code, that is the reason why we hadn’t listed it in this blog.

This is really interesting, You are a very skilled blogger.
I’ve joined your rss feed and look forward to seeking
more of your magnificent post. Also, I have shared your web site in my social networks!

Thanks for sharing your thoughts about copy and paste.
Regards

Highly descriptive post, I enjoyed that bit. Will there be
a part 2?