My Dashboard
SIGN OUT
Find anything about our product, documentation, and more.

Syncfusion jQuery no longer in active development. Switch to our pure JavaScript based next generation Essential JS 2 . 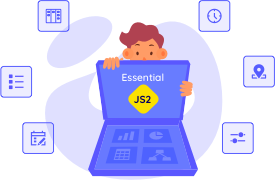 Try Essential JS 2 No Thanks!

The ASP.NET Web Forms Checkbox is a custom HTML5 input-type checkbox control. It allows users to select one or more options from a list of predefined choices.

A single checkbox consists of toggle states for performing check and uncheck actions. To prevent the toggling of a checkbox value, you can use the disable option.

You can use different checkbox sizes, default and small, as required in your application.

Add a label to define the ASP.NET Web Forms Checkbox control’s caption. You can caption the checkbox and position the label either before or after the checkbox.

The checkbox UI (frame and icons) can be completely customized.

The ASP.NET Web Forms Checkbox control ships with several built-in themes such as Material, Bootstrap, Fabric (Office 365), and high contrast. Users can customize any of these built-in themes, or create new ones to build their own desired look and feel either by simply overriding Sass variables or using our Theme Studio application

You have control over all the UI elements and behaviors of the Checkbox with a rich set of developer-friendly APIs to provide the best experience to your end users.

The ASP.NET Web Forms Checkbox supports several built-in themes such as material, bootstrap, office-365,and high contrast. Users can customize any one of these built-in themes or create new themes to achieve their own desired look and feel by using our Theme Studio application.

Our Customers Love Us

Having an excellent set of tools and a great support team, Syncfusion reduces customers’ development time.
Here are some of their experiences.

We chose Essential Studio based on the breadth and quality of the components and the excellent support.
Marc Scheuner,
inova:solutions AG

I would highly recommend using Essential Studio and have found that the Syncfusion support team is one of the fastest I have worked with.
Georg Kukula,
G&W Software Entwicklung GmbH

Rated by users across the globe