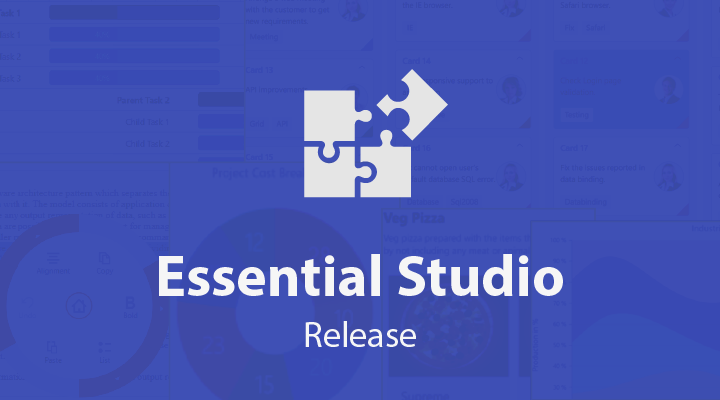 With all the news coming out of Microsoft’s Build 2017 Conference last week, you may not have noticed that Syncfusion released Essential Studio 2017 Volume 2 on Tuesday. On the What’s New section of Syncfusion.com, you’ll find a full list of all the features, enhancements, and controls we added. Much in this release relates to topics resounding at Build, especially when it comes to Xamarin.

Volume 2 brings two new controls to Essential Studio for Xamarin. A new sunburst chart control allows hierarchical data to be displayed in a circular fashion with support for labels, legends, and custom colors. We’ve also added an image editor control that lets you modify images by cropping, annotating, rotating, and flipping them with an interactive toolbar.

And although the list view control was previously released for Xamarin as a preview version, Volume 2 marks its official release as a full-fledged control.

A new Gantt control has been added to Essential Studio for Universal Windows Platform. This control is a popular project management tool whose performance has been praised on other platforms. Now, as part of Syncfusion’s UWP suite, its key features include interactive editing, related tasks, sorting, and customized timescales.

Another new control worth mentioning is the date-range picker that has been added to our ASP.NET MVC suite. With this control, you can pick a range between two dates, either predefined or custom, with an option to make the selection from a pop-up window if needed.

Here I’ve mentioned a few of the features that are simply highlights of everything that’s included in Volume 2. A more in-depth review would reveal that many new features have been added to our JavaScript and ASP.NET Core suites, as well as all our other studios. We invite you to try out the latest release! You can download a 30-day trial and let us know what you think via Twitter or Facebook.