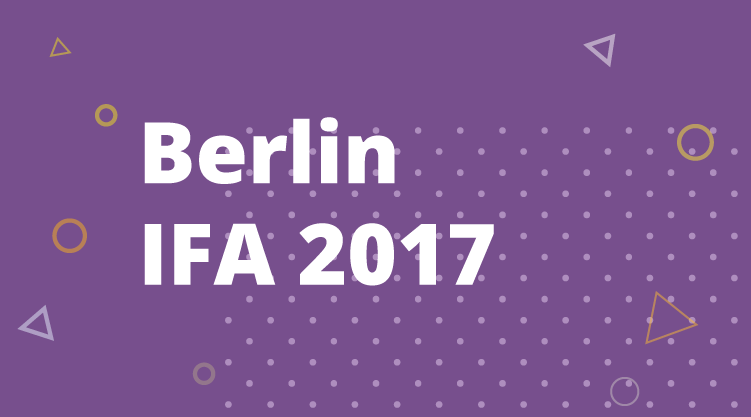 The Odd and the Awesome Tech of IFA 2017 Berlin

Last month was the Berlin IFA 2017, Europe’s biggest annual tech expo. This massive exhibition counted 1,800 presenters this year, from tech giants like Huawei and Sony with new phones to show off, to smaller companies with innovative technology to introduce to attendees. Both groups were full of interesting oddities we wish we could have seen ourselves. Here are a few of the more interesting offerings.

This mini-fridge comes when you call it. Image from Engadget.

The IFA exhibition is traditionally a show for consumer and home electronic tech, so we’ll start with the kitchen. Panasonic presented a concept for a movable fridge/sake server. While sake lovers may be interested in this mini-fridge’s ability to pick a meal to go with your sake, most people are reacting to the fact that it can learn the layout of your house and, upon hearing your voice command, roll to wherever you are in it. Panasonic is even offering the possibility of being able to load it with dirty dishes to take back to your dishwasher, though it doesn’t elaborate on the how. So, for all of you whose dearest ambition is to mold into the upholstery of your couch, this fridge on wheels is estimated to be available on the market within the next six years. Now you just need a movable toilet.

A friend who won’t hog your kid’s favorite toy. Image from trendy.nikkei.co.jp.

Panasonic also demoed what they call the “Educational Partner,” a sociable robot. This robot is designed to help kids ages 3–6 in education and play. For parents with little patience for other people’s children, their kids can still learn to socialize with robots. The robot is an orb with a glowing, emoji-like face and a child-like lisp that parents can program to brainwash stubborn tots into eating their vegetables, according to the demo video, and to take innumerable photos of the children secretly to “track their growth.” This should lend to more variety to the poses proud parents can upload to social media hourly.

Speaking of interactive robot companions, Pawbo introduced its latest model, called Munch. This robot engages your pets in symbol-matching games and rewards them with treats when you’re not home (or even when you are) to entertain them. The device also plays music, so your pet is both visually and auditorily stimulated. On one hand, your pets may come to love the robot more than they love you. On the other, your furniture may escape annihilation.

This mirror might have made the evil queen a bit humbler.

For those seeking the latest trend in achieving beauty goals, the HiMirror Plus could be for you. This “mirror” is password-protected, has five lighting settings, and keeps a record of your skincare history, which could be quite useful for people who have trouble keeping track of which products they’ve tried and what the results were. Of course, that’s not all this shiny companion does. The company touts this gadget as a “personal skincare consultant” on their website (where you can drag a bar up and down the supermodel’s before and after photos—were the redness and blemishes photoshopped into the before image, or photoshopped out of the after image, you think?). Fitted with a camera, the mirror assesses your face to let you know in detail what’s wrong with the way you look, whether it’s fine lines and wrinkles, or dark spots and circles. It then gives advice on how to fix your face based on big data analysis, recommending routines and products with good online reviews that may work for you, given your previous attempts and results. If having a gadget tell you how your face can be less ugly isn’t enough for you, the company also produces the Smart Body Scale, which assesses your body’s muscle, fat, and bone mass, as well as your metabolic rate, and can tell you what’s wrong with the rest of you and how to fix it, too.

Dry your hair, join the CDC, something like that.

For your hair, ProfiCare has come out with an alternative to the usual hand-held hair dryer in the form of a hair-drying hood. The PC-HTH 3003 has two temperature settings, overheating protection, and an ionizing function for shiny, antistatic styling. What it doesn’t have (online, at least) is an explanation for how it works, or pictures of real people’s hair (or ears) after using it.

The BH51M helmet won an innovation award at IFA.

A good way to ruin your newly dried and shiny hair is to wear a helmet. If you must, however, Livall’s smart BH51M helmet at least lets you listen to your playlist via Bluetooth or hold hands-free phone conversations as you skateboard through chaotic parking lots or ride your bicycle to work on busy roads. The good news is that, if your distracted riding or boarding results in an accident, there is an SOS function that will inform a preset contact automatically. Another plus is that the helmet has LED turn signals on the back, so you don’t have to use those hand gestures no one understands when you want to turn.

To complete the circle, or maybe just circle back around, the Miele Dialog Oven deserves a bit of a jaw-drop for precision technology, and a bit of drooling from those who burn food as often as bake it. This oven detects the texture of the food within it and keeps track of how much energy the food has absorbed, using electromagnetic waves, a convection fan, and radiant heat to cook food perfectly. The precision was demonstrated at the expo with pieces of fish in blocks of ice. The oven managed to cook the fish properly without melting the ice. Currently, this miracle oven is only available in Europe, and at $10,000 each, getting fancy with new dish combos will remain the province of professional chefs for a while even there.

The Internationale Funkausstellung Berlin had plenty more strange and wonderful technological inventions. What are some of your favorite innovations of the year so far? Let us know in the comments, or on Facebook or Twitter.