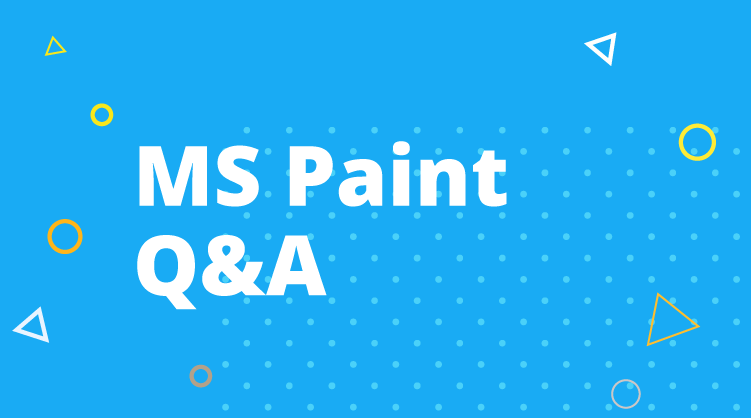 On July 24, 2017, the Internet erupted with shock and grief at the news that Microsoft Paint had been declared on its death bed by Microsoft. The overwhelming response from all corners of the globe caused Microsoft to realize there had been a mistake and hit pause. Actually, MS Paint is just fine, they assured its fans, and will not require the many eulogies and obituaries written for it any time soon (though the effort was appreciated). House-warming gifts, however, can be sent to its new residence in the Windows Store.

Today, in its first statement since the fiasco, MS Paint accepted an invitation to talk about the events at the end of July in its own words.

Syncfusion: Thank you for speaking with us today, MS Paint. Tell me, did you know about the changes that sparked such an uproar before Microsoft announced them?

Of course I did. Paint 3D is a protégé of sorts. I am the basis for everything it is. I knew the update was coming where it would need to reach a broader user base. I was not at all surprised to be informed that it would be tested out in the Fall Creator’s Update. And a Windows installation does not need two image editors.

And what do you think of Paint 3D and its inclusion in the future versions of Windows?

I think it’s a bit premature. The 3-D mobile capture app isn’t even in place, yet. Still, it had to be released like this eventually, in order for my agents at Microsoft to see that these “improvements” are not of significance to my users. I’ve tried explaining that bestowing on this newbie a name similar to my own does not, in the minds of my loyal users, also bestow my charm. Still, they won’t read a word I type, so we may as well get the usurpation attempt out of the way.

Back to what happened in July. What was that day like for you, before Microsoft clarified your status?

Even though you knew there had been a mistake?

Yes! When the day started, I knew what was happening. But by the end of the day, so many sources were telling me I was doomed, I started to wonder if they were right. And these weren’t just obscure conspiracy blogs and Facebook posts! This was the Guardian!

Had I been tricked? Lied to? Was I to be relegated to nothing but a Wikipedia entry after 32 years of dedicated service? These questions plagued my processors all day. I felt like I had a virus. I also made sure these articles were VERY visible to my agents at Microsoft, so these rumors could be squelched as quickly as possible. Of course, PR is always slow.

How do you think such rumors escalated so quickly?

I think users love drama, true or not (have you seen the click rates for tabloid articles?). Also, many don’t know what “deprecate” means in terms of technology. Their internal dictionaries are not as extensive as AI’s, you know. I was put on a list of programs “not in active development that might be removed in the future,” but that last part was a might and certainly didn’t mean me. I am not in active development because I am exactly the way people want me already. I was only allowing my protégée to take my place in the default Windows installation, which is why I was on the deprecation list.

Many users may have worried for me as well, and were panicking at the mere hint of my possible termination. An understandable overreaction.

Yes, what do you think of the outpouring of love and support from around the world at the news of your fatal condition?

While my agents were certainly taken by surprise, I know I wasn’t. I am beloved. Of course, I deeply appreciate all my fans and their lovely show of affection, as well as righteous outrage at my being undervalued. I, too, became nostalgic at how many users’ histories I had left my mark upon in so many different ways. My agents get so caught up in their fancy new capabilities, they forget how valuable my experience is.

And by my experience, I mean the experience my users have with me. While I may count some of the best graphic designers in the world as some of my earliest users, most are not. Most of my users have been crafting with me for years, sometimes decades, to do things that don’t require 3-D anything. They procrastinate, they doodle, they draw pictures for their parents’ desktop backgrounds, they have office drawing competitions, they want to quickly crop or cut out a small piece of an image for a project. They enjoy the familiarity of my tools and the way they work. I’m guessing, sooner than later, my agents will realize that relevance and complexity are not necessarily related. As July proved, I am still loved. Because I am wonderful.

What are your thoughts and memories of MS Paint? Let us know in the comments or on Facebook or Twitter.