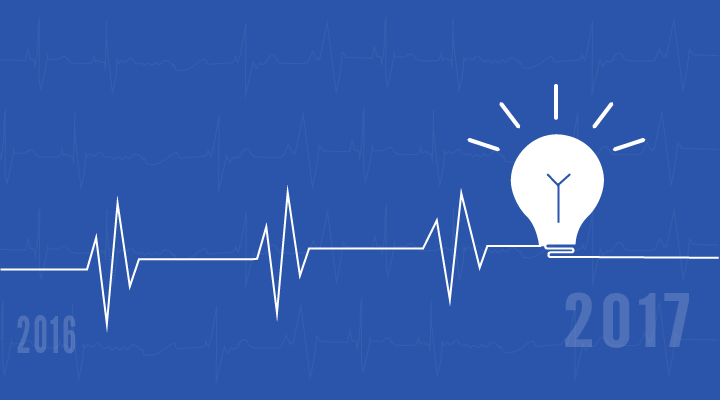 Ah, January. With the new calendar replacing the old, January is the month in which people believe most strongly in replacing their old selves with an improved version. And by that, we usually mean improving our habits to improve our health. Well, 2016 was a year of innovation in products to make people healthier. Below are some of what we think are the most interesting and possibly helpful inventions of the past year, whether they are currently for sale, still in development, or somewhere in between.

First, the most popular New Year’s resolution of all time: fitness! From wrist devices like the LVL by BSX Athletics that use near-infrared scanning to monitor your hydration levels, to sensor technology embedded in a runner’s very shorts, the net is flooding with Fitbit-like devices to monitor your health as you exercise, producing all sorts of metrics to inspire (or guilt) you into optimal regimes. In order to inspire U.S. kids to get active, UNICEF has even developed a wrist device that sends food packets to malnourished children in proportion to the physical activity of the kids wearing the devices.

In addition to wearable monitors, athletic shoes have seen some technological improvement. The main buzz surrounds Nike’s self-lacing HyperAdapt sneakers, which auto-adjust the shoes’ tightness via sensors. Right now, they’re being advertised as useful to professional competitors who can spare an arm and a couple fingers to buy them, but there’s future potential for the technology to help those with limited motor function in their hands, too.

You know what isn’t healthy? Slipping on ice and cracking your skull. So #2 interesting advancement in athletic shoes goes to Vibram’s Arctic Grip technology, giving wearers traction on wet ice. The technology is now available on Wolverine brand shoes, some of which (like the ones above) are pretty cute, so ditch the treadmill and get moving through those winter wonderlands.

Speaking of winter wonderlands, check out Digitsole’s new smart shoe. Sure, these shoes look like they came out of Star Wars and can track health metrics, be recharged wirelessly, and tightened via voice commands to your smart phone app, but who cares about any of that in the face of the fact that they are also heated? Because no one wants to leave their blanket fortress in January to take a walk when they know they’ll have ice blocks instead of feet within minutes.

Other innovations to improve personal health involve devices to help you sleep and devices to help you breathe. The SensorWake alarm clock wakes you up (or gives you hungry dreams?) naturally by filling your bedroom with scents like espresso or toast. The Hello Sense sleep monitor tracks your sleep patterns and environment to wake you up at the right time in your sleep cycle and tell you why you still feel like death warmed over.

For the health of our lungs, crowd-sourced companies are creating air purifiers. Two of note are the Wynd personal air purifier to give you a bubble of clean air, and the Molekule air purifier, which destroys air pollutants in whole rooms. The latter is currently sold out, but I’d be looking at the former for city offices.

While there are lots of other interesting personal health innovations, like The North Face’s breathable waterproof jacket, Withings’s no-contact thermometer, and the Morpher folding bike helmet (again, cracked skulls are not healthy), it’s possible that this invention is the one to keep you healthiest : Sharkbanz.

Because being eaten by sharks while swimming or diving is not healthy. Not healthy at all.

Check out these cool new devices to inspire you to be healthier in 2017 (at least until February), and then tell us what you think of them. Did we miss one you find particularly compelling? Let us know in the comments below or on Facebook or Twitter.