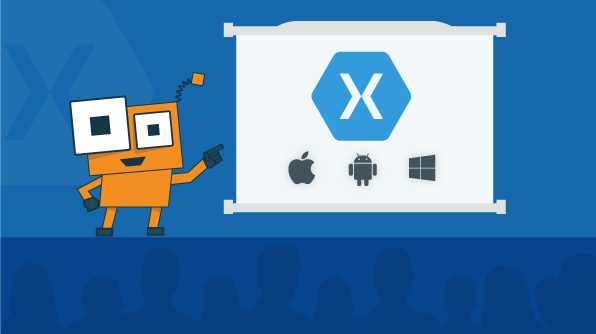 Talking Xamarin.Forms on The Xamarin Show

Syncfusion has enjoyed a strong relationship with the folks at Xamarin ever since we released Essential Studio for Xamarin in 2014. Since then, we’ve hosted a number of Xamarin Dev Days and have dedicated a lot of resources to promoting their platform and developing what we believe is the largest offering of Xamarin controls on the market.

Recently, Aaron Melamed, a product solutions specialist at Syncfusion, was interviewed by James Montemagno of The Xamarin Show, which airs on Microsoft’s Channel 9. Aaron showed James how to make a mobile app with Syncfusion’s Xamarin controls, harnessing their speed and efficiency so that developers don’t have to bother with the minutiae of an app’s functionality, but can instead concentrate on an app’s core mission. Demonstrating with a sample application—called Robot Toy because it simulates a remote control for a toy tank—Aaron used Syncfusion’s list view and diagram controls to illustrate how our controls seamlessly interact and can be modified for custom software development.

Walking through the waypoints of building the demo app, Aaron explained how he used Syncfusion’s documentation as a guide through each step of implementing and customizing the controls. Syncfusion’s documentation contains hundreds of pages covering all the components in Essential Studio for Xamarin. Entries for each control give developers what they need to know in the beginning—an overview and how to get started—and what they need to know once using the control, such as populating data and customizing the appearance.

Although the documentation makes it easy to use any Syncfusion control, live samples do a better job conveying how a control works. Aaron reviewed control samples for iOS apps and Android apps, which are available from the Apple App Store and Google Play, respectively.

The samples of the controls are not only categorized by control type, but the features of each control are showcased as separate samples—meaning you aren’t left on your own to figure out which features are enabled in a sample.

Readers can watch the full interview on Channel 9’s website, where episodes of The Xamarin Show with James Montemagno can be downloaded and streamed.

Android developers and iOS developers can learn more about Syncfusion’s entire suite of Xamarin controls by visiting the Essential Studio for Xamarin page. There you’ll find a tour of more than 130 controls.

Aaron’s second appearance on The Xamarin Show is now available. Watch the full video on Channel 9 to see how Aaron integrates Syncfusion’s controls into a Xamarin.iOS app.