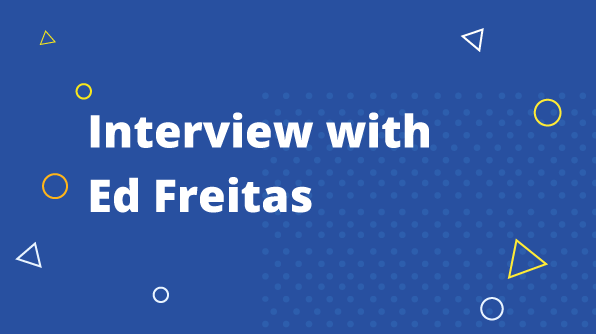 The following is a short interview with Succinctly author Ed Freitas, whose new book, Ionic Succinctly, was published on Monday, April 23. You can download the book on the Syncfusion website. The landscape of mobile app development frameworks is fragmented. On one side, some platforms attract developers because of their native performance gains, while on the other side, the HTML-based frameworks have always made developers think twice about even choosing them.

Unlike other cross-platform frameworks, Ionic has been consistently gaining popularity and the framework has become the de facto standard in hybrid app development. Following are some convincing features for why people should be interested in this framework, and thus my book:

·       Cross-platform—The Ionic framework lets you use the exact same code base for all supported mobile platforms, eventually saving you a ton of development and maintenance time and giving you cost benefits.

·       Free of cost—Ionic is open source and available under MIT license, which grants permission, free of charge, to any person obtaining a copy of the software, to deal in the software without restriction. In simpler words, you can use Ionic commercially without paying a cent.

·       Strong ecosystem—Ionic doesn’t come with one compressed file of the framework and make you do the heavy lifting of creating builds, setting up environments, and doing packaging by installing tons of other libraries and tools.

·       Based on Apache Cordova—Apache Cordova is an open-sourced app packaging framework being used by many other frameworks, and Ionic therefore has become one of the standards in hybrid app development. Ionic allows developers to use standard web technologies—HTML5, CSS3, and JavaScript—for cross-platform development.

·       Easy learning curve—Ionic uses HTML, CSS, and JavaScript for Ionic app development and JavaScript is the lingua franca of the web. Millions of developers around the world are working on web apps using the same technology stack.

Approximately a year ago. I was looking for a way to write hybrid apps without using different frameworks for each device platform. I explored various options and Ionic was the one that caught my eye. It was instant love!

Yes, very much. The whole writing experience was a continuous and fun learning challenge! It was interesting to learn the front-end markup as well as the code-behind using Angular and Typescript. The other great thing about Ionic is that it enforces certain good development practices that allow you to organize your code in a way that makes it easy to make changes much later on.

How will Ionic change over the next few years?

It’s just exponentially exploding in terms of improvements by the day, with new side projects and frameworks that complement Ionic development, most recently Stencil and Capacitor, also from the makers of the Ionic framework.

Do you see Ionic as part of a larger trend in software development?

It is indeed part of a much larger trend. Ionic was probably the first serious player in hybrid application development along with React Native. However, there are now various other alternatives in the market, such as NativeScript, Monaca, Framework7, and others. The future of this space looks super exciting!

There are a lot of nice books out there that broaden this topic, however, I recommend Mobile App Development with Ionic 2: Cross‑Platform Apps with Ionic, Angular 2, and Cordova by Chris Griffith, published by O’Reilly Media.