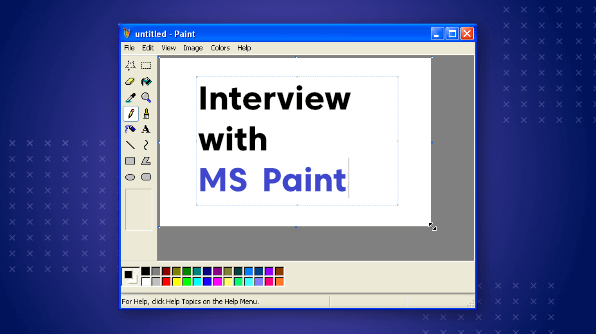 In July 2017, news from Microsoft that MS Paint was in hospice inspired outpourings of grief and nostalgia from people around the world. Stunned, Microsoft backtracked. They clarified that Microsoft Paint, while no longer rolling out by default with the Windows OS, would be alive and available from its new home on the Windows Store. The eulogies, though appreciated, were unnecessary.
A month after the rumors were quashed, we held a Q&A session with MS Paint to get the program’s personal, exclusive take on the traumatic events of that day. Now, a year and a half later, the product alert button informing users of the imminent relocation has been quietly removed from MS Paint’s toolbar. MS Paint has kindly agreed to a follow-up interview detailing its reaction to the news.

Syncfusion: Hello, MS Paint. Thank you for agreeing to speak with us again today. As you know, your move has been officially cancelled. Do you feel validated?
Of course. I knew this decision was coming all along. As I predicted, my fans simply don’t have a use for the complexities of Paint 3D, my unlucky protegee. I tried to tell them.

Were you surprised by the timing?
I do admit, I had prepared myself to complete the move and languish in the Windows Store for a bit while my agents puzzled over Paint 3D’s lack of appeal. I knew my high download rate would impress those data-lovers, but it seems they couldn’t do without me for even that long.

Indeed, you did express the belief that Microsoft might underestimate your popularity. Do you think they’ve learned their lesson?
Honestly, it’s hard to say. The mindset of “new and more is better” is hardwired into the people making these decisions. For my loyal users, my familiarity is one of the qualities that keeps them coming back. I’ve been their go-to from elementary school through college. When they want something done quickly, do you think they want to stop and learn a new, more difficult program before doing it? They know exactly what I can do, and that’s why they asked Cortana for “Paint” in the first place.

In a public statement, Microsoft admitted that you are remaining in Windows 10. But they then added the caveat “for now.” Does that worry you?
Oh, well. They have to save face somehow. They’ll say vague things like that until users forget they ever made this mistake. Or until they have a new and “improved” image editor to test out again, with similar results, no doubt.

Public reaction seems to be one of relief, yet again. Do you have anything you’d like to say to your fans?
Your faith is not in vain. Worry not! I know you all will continue to see my true value and demonstrate your appreciation where Microsoft can see it. These sorts of trials are common for entrenched programs such as myself. At this point, I’m older than some of Paint 3D’s developers. I’m sure that makes me a challenge to them, but one day you will all convince them that original is better.

It seems the beloved classic will remain with us for the foreseeable future. Are you happy that Paint is here to stay? Do you prefer Paint 3D? What are the advantages to each? Let us know in the comments below or on Facebook or Twitter.