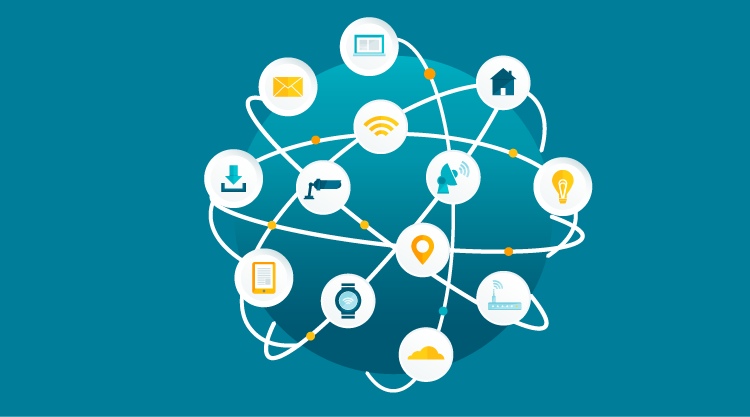 The Internet of Things

The supposed first thing in the Internet of Things was a drink machine at Carnegie Mellon University that was connected to the Internet in the 1970s by its computer science department. Through the Internet, people could find out whether the machine was stocked with drinks, how long each drink had been in the machine, and whether the currently available drinks were cold. The drink machine is still there and is still connected to the Internet, but as you can imagine it has been through a couple interface updates over the years.

Today, the primary purposes of the Internet of Things is to make human interaction with the world more dynamic, efficient, and convenient. For instance, sensors embedded in farm equipment are able to communicate to farmers which crops are receiving less water than others or which fields require more fertilizer. In retail, stores are able to send customized promotional offers to a customer’s mobile device based specifically on his or her location within the store. Adapting and responding to physical information as it is created is an enormous innovative leap from historical data analysis that, until recently, was the only mode for working with collected data. This new model has far-reaching implications across fields as diverse as energy production, healthcare, public safety, retail, food production, transportation infrastructure, and so many more.

Here in the Research Triangle of North Carolina, one public exhibit of the Internet of Things is the installation of solar-powered garbage cans that are able to communicate via email when they are full, and compress their contents to hold more garbage than ordinary receptacles. These improvements save the local government and sanitation workers time and money by requiring fewer pickups and reducing the amount of litter on the streets. And although these new garbage cans require some electricity to operate, their built-in solar panels produce enough that they are entirely self-sufficient. According to estimates, the garbage cans, which cost about $6,000 each, are expected to pay for themselves in only four years.

The potential reach of the Internet of Things is virtually limitless, encouraging tech giants and hobbyist developers alike to see just how far they can go, for better or worse. Syncfusion controls have been implemented on both sides of this frontier. Several oil and gas producers have used Syncfusion services and controls to monitor and react to real-time fuel production information. On the domestic side, developers like Giancarlo Lelli have used Syncfusion WinRT controls to create personal applications for monitoring and adjusting temperatures in their homes.

If you’re wary that the Internet of Things is just another buzzword that is going to fall out of favor quickly, consider it alongside a closely related technology that is also on every tech blog’s hype radar: wearables—products like Google Glass, Fitbit, and various smartwatches. Where press about wearable technology attempts to declare it dead-on-arrival (see this Yahoo! Finance blog or Nike’s discontinuation of its FuelBand wearable), the Internet of Things holds more promise. Wearables depend primarily on consumer trends. They’re closely tied to the smartphone the wearer uses. Thus, they’re as much fashion statement as they are tools for improving lives. Devices and applications in the Internet of Things are device-agnostic in that any device capable of communicating through Internet protocols will suffice. Above all else, the Internet of Things is designed to improve the quality of products and experiences that already exist. Its devices are not likely to become status symbols. The primary aesthetic important in an Internet of Things sensor is its size. A sensor in a pacemaker that monitors bloodflow or one in a greenhouse that monitors sunlight isn’t going to be a sleek conversation piece for showing off to your friends, unless your friends are into microprocessors and wireless communication protocols.

One caveat to the immense promise of the Internet of Things is the daunting security concerns. As reported by Gartner, IT professionals are facing entirely new areas that have never been subject to security threats before. At the Defcon hacker conference last year, two researchers revealed that they were able to hack cars with alarming ease. By tweaking the code of the onboard computer systems, the researchers were able to disable power steering and brake function on command, and even show incorrect values on console gauges. In the aftermath of Heartbleed, the progress of the Internet of Things may seem like too great a risk, but as with any new technology, only those who don’t understand it will call for a retreat. Those who recognize the great potential of the Internet of Things have the ability and drive to confront the challenges as they come.

As this new Internet spreads, let us know what you’re looking forward to, and if you’re working on any such projects. I, for one, am hoping that it will eventually be granted a better name.