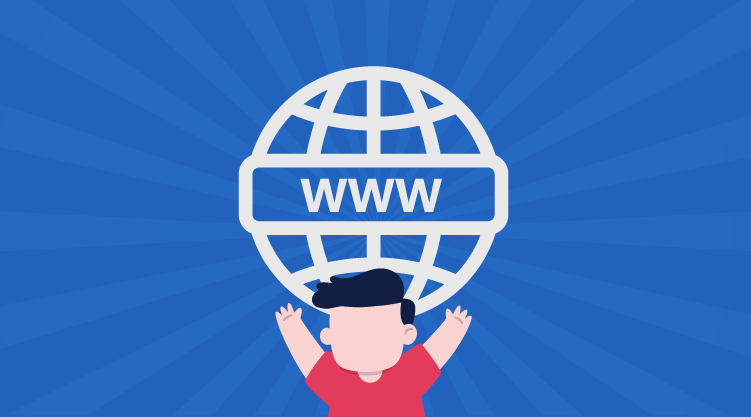 The Internet. Facebook. Twitter. YouTube. These are defining features of modern life, platforms for distributing multimedia information at rates and volumes unimaginable through most of recorded history. This is the legacy of the World Wide Web, the vast construct that is the foundation of our information-driven society. To celebrate this monumental creation, August 1 is recognized as World Wide Web Day.

But what is the World Wide Web? It’s not visible or tangible, but rather it is an information space: a set of related ideas held together by an organized system for collecting, storing, and sharing information. On the World Wide Web, resources are identified by Uniform Resource Locators (URLs), connected by hypertext links, and accessed via the Internet. The Internet, by contrast, is the global system of interconnected networks that allows for the exchange of information between users. In other words, the Internet could be considered a body—bones, muscles, circulatory system—that allows for basic functionality, while the World Wide Web is a combination of brain and genetic code that determines how the body is organized and functions. It would be possible to have a functioning Internet without the World Wide Web, but without the World Wide Web, we would not have the websites, social media platforms, applications, or other elements that we have come to rely upon.

To continue with the body/brain analogy, you might be thinking that it seems unlikely that we could have invented something as complex as the World Wide Web wholesale. You would be correct. The Internet came first, and its precursors can be traced to networks developed in the 1960s. Most famous and significant of these was ARPANET, a US Department of Defense project that explored new ways of communicating data that would become the foundation of the modern Internet. As these networks grew in scope and complexity, it became more feasible—and more necessary—to find new ways of interacting with the data they carried; without a useful framing, the Internet would be little more than a fancy telegraph to be used to pass information from one point to another.

While there are many differences, the basic purpose of the telegraph is nearly identical to that of the Internet. (Image source: Smithsonian Magazine)

In 1980, an independent contractor named Tim Berners-Lee created ENQUIRE. This was a personal database of people and software models that he created while working for the European Organization for Nuclear Research (CERN). At the time, CERN employed some 10,000 people, and they were using email and file sharing to conduct work and share information. But as projects grew in complexity and interconnectedness, such basic communications were reaching the limits of their usefulness. ENQUIRE allowed for the creation of information pages that could be accessed to acquire more information on a topic, and which could be directly connected—linked—to other pages. While primitive by modern standards, ENQUIRE served to bypass much of the arduousness of direct, person-to-person communication and file exchange. It also served as the foundation for the modern World Wide Web.

CERN’s systems proved inspiring to visitors, who would take the software back with them to their own institutions. These early implementations were created by and for academics; this was the field with which CERN had the most contact, and the field with the most need for rapid and efficient information exchange. But the appeal of the Web was so great that interest quickly spread. This saw a flourishing of web browsers, interfaces designed to make web content more easily accessible and visually appealing. At the beginning of 1993, there were a mere 50 web-enabled networks in the world. By the end, there were over 500.

The Syncfusion website (www.syncfusion.com) rendered in a web browser is considerably easier to navigate than its source code.

In 1994, CERN held the first International WWW Conference, and there a number of web standards were adopted. Among other things, the Web was made free for all users, with no royalties or patents to restrict use. This was a monumental moment for the World Wide Web, and ensured that anyone who wished to develop for it could do so. This led to the dotcom boom of the 1990’s and threw open the door for any number of web applications.