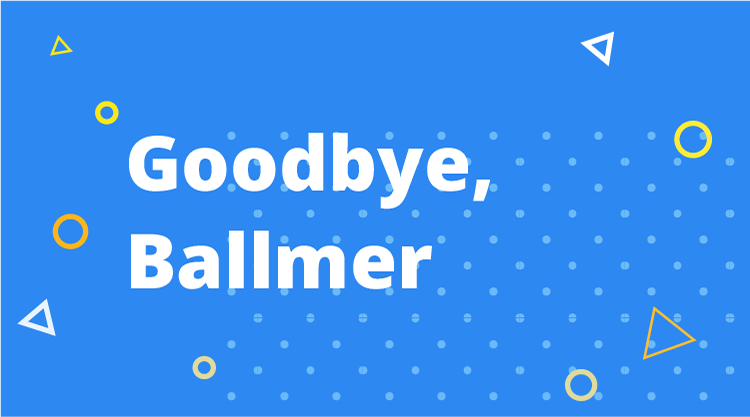 Steve Ballmer is leaving his post as the CEO of Microsoft within the next year. For more than a decade, Ballmer has guided the corporation through a gamut of software and hardware development, including the world-dominating Windows XP operating system, the Xbox video game console that continues to rival Sony’s and Nintendo’s offerings, and the current frontiers of cloud services and tablet devices.

Before becoming CEO, his varied roles at Microsoft fostered important business deals, such as the use of the first Windows operating system on personal computers produced by IBM. And though business analysts will tout how much Microsoft’ revenue grew or how many companies Microsoft acquired under Ballmer’s leadership (ahem, 84 to be exact), his true legacy will be the development of the .NET Framework, the very backbone of Windows application development for more than 11 years.

The .NET Framework is why Syncfusion exists today. Its debut made clear the vast possibilities for enterprise applications, and since then Syncfusion has created tools and components to deliver the innovation promised by Ballmer and the framework. Businesses at large, from financial firms and energy companies, to automobile makers and broadcasters, have embraced the .NET Framework to create in-house applications that promote efficiency and widen profit margins. Freelance developers and consultancies have used .NET to deliver desktop and web solutions on all scales. And Syncfusion has been there every step of the way, from 1.0 to 4.5, building controls that leverage the best of what the framework offers.

Ballmer has also been instrumental in the advancement of Microsoft’s endeavors into cloud computing. The construction of data centers around the world and the acquisition of Skype have each helped Microsoft navigate the changing landscape of business computing in their own ways, but at the forefront of its cloud effort is the Azure platform. It has increased Microsoft’s accessibility to developers by providing a scalable, open platform for hosting mobile services, virtual machines, websites, and much more. Developers are not limited to Microsoft technologies only when building Azure services, though the .NET Framework can certainly be used. For more on the flexibility Azure offers, check out Syncfusion’s free e-book.

Ballmer’s leadership has allowed Microsoft as a corporation to thrive and keep shareholders happy, but his true accomplishments are a result of his ability to maintain Microsoft as the uniting force at the center of a community of dedicated software developers. His enthusiasm over the years has demonstrated a clear appreciation for that community. No one will soon forget his timeless, madly captivating cheer, “Developers! Developers! Developers!“

But perhaps a more earnest reflection of Ballmer’s dedication can be found in his closing words at this year’s Build conference: “As developers, we know you have a lot of choices…the opportunity as an application developer to use Windows on the device, and Windows Azure in the cloud to build next-generation mobile, connected, experiences has absolutely never been better than it is today…And I want you to leave with but one thought — the future of Windows is very, very bright.” As Ballmer’s time at Microsoft nears its end, one can only hope that the next CEO will be able to inspire developers and clearly define the path forward for Microsoft the way he could.