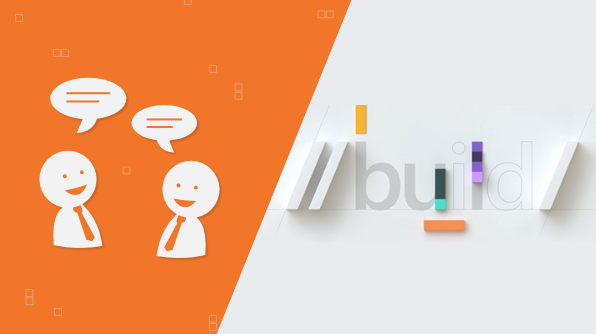 Our team from Syncfusion got all geared up for Microsoft BUILD Conference 2019. We donned our Syncfusion shirts and our Syncfusion Cody socks (see image above). We enjoyed meeting with attendees, learning about their projects, and highlighting our latest controls.
Attendees we chatted with at our booth were most impressed with our wide range of controls for Xamarin, Blazor, JavaScript, Angular, and React. My colleague, Carter Harris, said that his most memorable conversation was with an attendee, Patrick Goode of Black Line IT. Patrick mentioned he loved our controls, especially ListView, Autocomplete, and Charts. He had created an app using our Xamarin controls, which Carter got to look at, and expressed interest in our new Feedback and Feature Request page.

Our colleague, Tim Brock, spoke with a customer who loves Syncfusion controls, recommends them, and really enjoyed our Syncfusion Cody-branded socks – posting a picture of Tim’s feet on Twitter, even!
We were also excited to meet with the Blazor PM, who came by and was blown away by all of our new Blazor controls; the excitement on his face was so great to see. He was really impressed with our level of commitment to the platform at such an early stage, as well as our ability to crank out a large number of high-quality and well-polished controls quickly. I was excited to hear Satya Nadella speak live at BUILD, as he is such an inspiring speaker. He stressed the importance of responsibility in technology—to offer technologies that people can trust. Nadella said that technologies need to respect privacy and that AI brings up the tough question of how to build AI systems without discrimination.
He also highlighted that this was the first time in the history of BUILD that they had children attending! As I saw after the keynote, there was quite a substantial Kids Corner with programming challenges, robots, arcade games, and kid-friendly snacks to boot.
He went on to talk about how Azure has become “the world’s computer” and is growing in terms of data centers and adoption around the world. He proudly announced the first data center on the continent of Africa and received a large round of applause. The audience around me seemed very excited about this.
The idea that Azure will work with any technology and any stack was a key focus of his presentation, as well. He gave the example of Starbucks using a combination of technologies, such as AI and Azure Sphere, to create efficiencies within the company and create an individualized experience for customers via their app. It was so cool to hear these updates from Satya Nadella; this embrace of diverse technologies is a new trend for Microsoft that is impressive to see.

On the show floor

Similarly to last year’s event, BUILD had a focus on using AI for good. A key example at the Microsoft’s AI booths were farming AIs. For example, an AI system could be set up to monitor ground moisture and to schedule irrigation when needed. This and other functions were brought to life by an interactive demo in the giant structure in the middle of the expo hall area. I tried it out, and it was an impressive graphical rendering of a farm using AI technologies. This Microsoft BUILD had a heavy focus on education. This was the first time that children were invited to this highly technical trade show event. It seems that in the spirit of empowering developers, they are including students in this mission as well. There was a great kids corner full of interactive programming challenges and opportunities. It included an interactive peg board and a station where they could program a robot and see how it moved, for example. There were also tons of snacks to keep the kids’s minds focused on learning. The classes were accessible to all attendees, as well, and so engaging that sometimes I observed more adults than school-aged kids attending the workshops. Some attendees, like myself, are on the business side of technology, and some of these in-person classes focused on end-user software, which was very helpful to us. I attended one about Microsoft TEAMS and learned to use some upcoming features like how to add a subject line to messages. Microsoft BUILD is a great place to reconnect with business acquaintances and learn about new technologies. I really enjoyed getting to know Microsoft PM Jenn Jinhong. She manages, among many other things, the Microsoft Visual Studio Dev Essentials Program. Starting this month, our Essential JS 2 will be included in their program for a free 6-month subscription, so we had been working closely together. It was nice to meet Jenn in person and walk around the Microsoft booths with her to get her technical view on the booths at the event. She told me about how cool she thinks CosmosDB is. She likes that it is a globally distributed database and they handle all the pain inherent in the system. They offer tools to let developers manage the global distribution pattern and computational resources.
We walked around and saw a BMW on display. I really like high-end cars, especially with the latest tech, so we had to stop to see it. It was there to demo how BMW is using Azure Edge to create interactive AI software for BMW drivers and customers. This would allow BMW to also brand the voice recognition software as their own. Overall, Microsoft BUILD 2019 was a great event, full of interesting tech updates, great conversations, and connections. I look forward to next year’s BUILD.

For more information on topics mentioned in this blog: