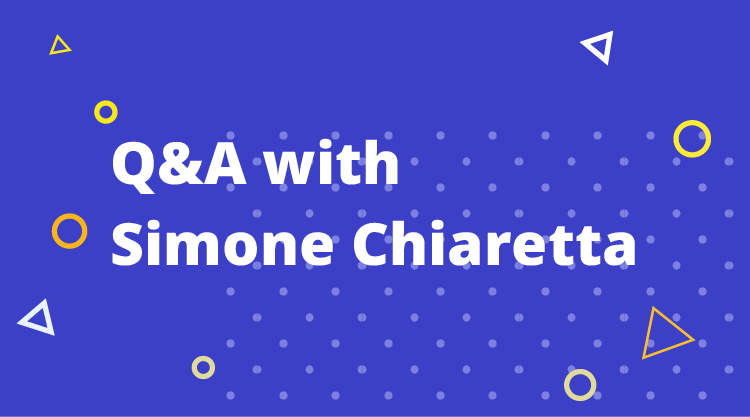 This interview with OWIN Succinctly author Simone Chiaretta is part of a series of Q&A blog posts with our Succinctly series authors.

1. Why write a book for Syncfusion?

I love sharing my experience and knowledge with other people—that was the reason why I started my tech blog almost 10 years ago. Another reason why I love writing is because it makes you learn technologies much deeper than just “using” them, and this fits well with my approach to learning and teaching. I wrote a book for Syncfusion about a technology, that in my opinion, is the foundation for the future of web development on the .NET stack, and I liked the idea of writing a concise manual that will be made available for free to the whole community. Normally free e-books are just the work of individuals, and published without much attention, but with Syncfusion they go through a thoughtful editorial process like printed books, and I think this makes Syncfusion e-books an amazing product. Experienced authors, a full professional level editorial process, and available for free: what more could a reader ask for?

2. Are these books your first technical manuals?

I was among the first users to embrace ASP.NET MVC when it was first announced in 2007, and part of the so-called Alt.NET movement promoting the approach that 8 years later evolved into what the Microsoft Web Stack is now. Given my passion at the time, I teamed up with another fellow developer that was closely following that trend, Keyvan Nayyeri, and I’ve written two books with Wrox, about ASP.NET MVC v1.0 and ASP.NET MVC v2.0.

3. What do you enjoy outside of software development?

There was a time a few years ago when I would have answered “more software development,” as I was spending all my time outside of my official work contributing to OpenSource projects, especially to Subtext, which has been for a few years the de facto official blogging engine of .NET developers. Now I’m happy to say that I went back to what I was doing in my 20s, outdoor activities. A while back, I was a rock, mountain, and ice climber. Now that I have moved from my beloved Alps to a flatter country, Belgium, I started doing triathlons, which for the uninitiated, is swimming, biking, and running, one activity after the other. It almost became a second part-time job as I train on average 8 hours per week. 2015 was my first year competing in a local series of races and in 2016 I’m planning on making the leap to longer distances (Half Ironman).

4. What have you learned since writing this e-book about Owin and ASP.NET 5?

Lately I’ve been trying to increase my skills in the new frontier of web development on .NET and incorporate in my development workflow the tools and frameworks typical of frontend developers, like Bower, AngularJS, Bootstrap CSS, Gulp, Grunt, SASS, and so on. And of course, keeping up with the always evolving features of ASP.NET 5 and ASP.NET MVC 6.

5. Do you have another reference that you would recommend to people interested in Owin or ASP.NET 5?

Just wait a few months and ASP.NET 5 Succinctly will come out, and that’s the only reference you’ll ever need. Jokes aside, current documentation on ASP.NET 5 is a bit sparse as everything is still evolving and the team is working on the code, and not a lot on the documentation. At the moment the best documentation is available on docs.asp.net, where people from the team and community members contribute and write docs, tutorials, and code samples.