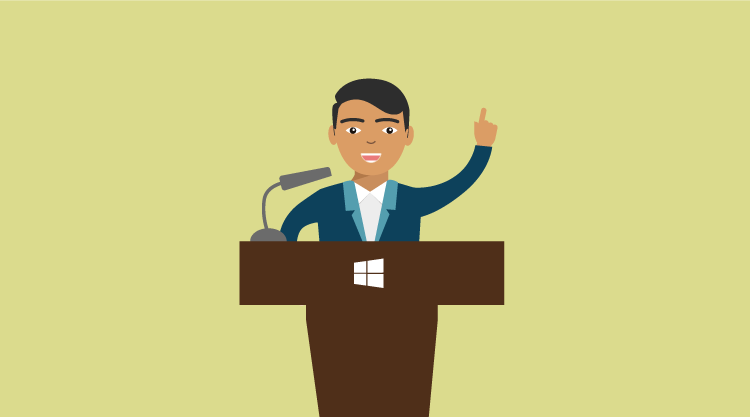 Windows 10 will start rolling out July 29, and just in time for this exciting new version comes a video on the topic from Matteo Pagani as part of Syncfusion’s participation in the Microsoft DVLUP program. Readers of Syncfusion’s Succinctly series may know Pagani from his e-books, such as the comprehensive Windows 8.1 Succinctly and More Windows 8.1 Succinctly, but in this video he turns his expertise with Windows and Windows Phone development to previewing the major features of Microsoft’s upcoming operating system.

Those new features comprise the bulk of the nearly half-hour’s worth of material. Pagani begins with a brief overview of the operating system’s history and purpose, charting a course that begins with Xbox 360 and Windows Phone 7.5 as entirely separate from Windows, and ends with the Universal Windows Platform, an operating system that spans desktops, mobile devices, consoles, tablets, and even holographic interfaces. Windows 10 is not a mere replacement for older software, but a logical extension of Microsoft’s design philosophies that intends to unite the disparate platforms of today’s technology under a single, flexible system.

That flexibility becomes a focal point for the video. Pagani begins by demonstrating, with the help of Microsoft Visual Studio, how multiplatform apps are created for Windows 8.1, a process that requires differentiating between the applicable platforms. He then shows how developing for the Universal Windows Platform requires no such distinctions, streamlining the process without sacrificing anything. When it is necessary to adjust an app for platforms that may have very different screen sizes or interfaces—such as a game intended for both console and mobile play—a number of features for customizing the app for every eventuality are demoed. Responsive app development, familiar to web developers, allows apps to automatically adjust to fit different display sizes, but features like VisualState triggers, multiple XML pages per background code, and the RelativePanel allow developers to manage app states, customize apps for specific devices, and control the relative position of controls regardless of display size.

In short, Pagani’s video is absolutely packed with practical demonstrations that showcase the potential of Windows 10. We at Syncfusion have been preparing for this new operating system, and we will be releasing a version of our powerful Essential Studio suite to take advantage of the versatility of Windows 10. “Essential Studio for Universal Windows Platform is a comprehensive suite of over 40 commonly used components including the DataGrid, Chart, Scheduler, Maps, Gauges, Editors, Diagram, and much more,” said Stephen Jebaraj, senior product manager at Syncfusion. “All components will render adaptively based on the current device family on which they are rendered.” With a beta version expected in the third week of July 2015, Syncfusion will be at the forefront of Windows 10 development.

If you want to stay current on Windows 10 and the Universal Windows Platform, watch Matteo Pagani’s video at the DVLUP site. Besides improving your knowledge of the latest Windows operating system, you can complete interactive quizzes and challenges for points that can be redeemed for cool prizes. Once you’ve completed the DVLUP quiz, let us know what you think of Windows 10 in the comments, on Facebook, or on Twitter.